Necessity is the mother of invention. In the days before heavy articulated AWD tractors, ingenious solutions such as this where common in areas of large scale prairie farming, sadly, few examples survive. This tractor is one of the earliest prototypes of what became a series of 97 units built to answer a lack of heavy implement pulling power in central Alberta in the 1960's. Built by machinist Glen Munroe in Didsbury, Alberta, these unique tractors became known locally as "Munroe Hitches". This unit was the second built and has been lovingly restored and preserved by the Spreeman family as it was built. Power is delivered from two highly modified John Deer 830 diesel tractors run in tandem and delivering roughly 135 horsepower to the drawbar from both of it's 7.7 litre two cylinder engines. The Munroe Hitch eliminated both front axles, thus steering is provided hydraulically from a centre pivot, articulated with hydraulic rams with pressure provided from the front engine. All forward controls except starting inputs are slaved to the rear cab via a series of articulated linkages, allowing throttle, clutch and gear selection to be done from the rear operators platform. These tractors represented big power on the prairie until the advent of mass produced, company built articulated tractors over half a decade later in the mid to late 60's. Filmed at Pioneer Acres Museum, Irricana, Alberta. Song: Heavy Artist: Huma-Huma Album: YouTube Audio Library Song: Moonshine Town Artist: JR Tundra Album: YouTube Audio Library 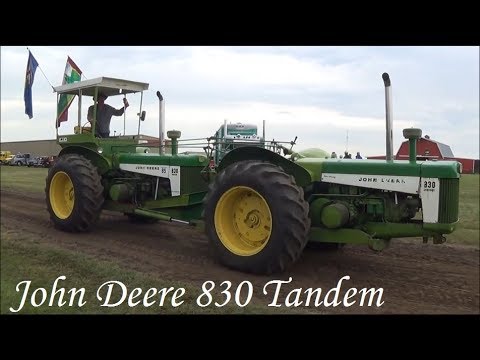 Antique Tractor Plow Day! The John Deere 720 Plowing Along With Members Of The Local Club